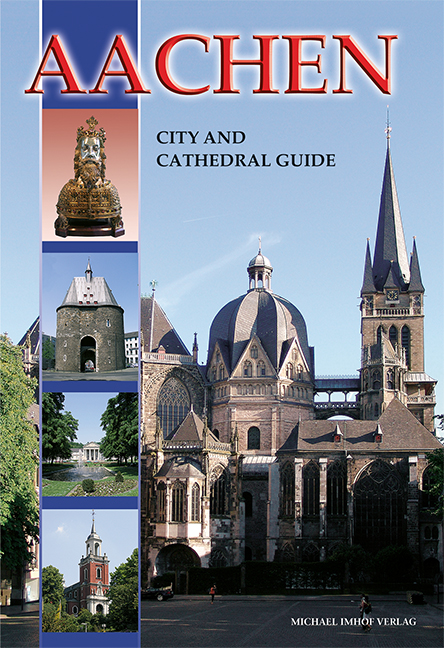 The richly illustrated guide gives an introduction and an informative overview of Aachen’s culturally and historically significant monuments on 32 pages. The focus is on the cathedral with its eventful architectural history and the valuable treasures inside. Another focal point are the historic buildings, from the medieval city wall and the imposing town hall to the spa district. Also included are the most important sacred buildings by Aachen city architect Johann Joseph Couvens in Burtscheid – the two churches of St. Johann Baptist and St. Michael – as well as the abbey treasury, newly established in 2003, in the cloister of St. Johann Baptist. In addition to the monuments of the Aachen Baroque, the buildings of the 19th century, which have a lasting impact on the cityscape, are honored.
The guide introduces the city’s most important museums: the Suermondt-Ludwig-Museum, the Forum Ludwig for International Art, the Couven-Museum, the International Newspaper Museum, the Museum of City History and Decorative Arts in Frankenberg Castle and the Computer Museum of the Rhenish-Westphalian Technical University.
Despite its brevity and brevity, the guide tries to explain the history of the city and its architectural monuments to the reader. It is not only aimed at visitors, but also at the residents of Aachen who are interested in their city. Well-founded in terms of art history, it provides background information and thematic focuses: cathedral, town hall, Middle Ages, Aachen baroque, historicism in the 19th century, the present.

Ines Dickmann has a doctorate in art history and works in the publishing industry as an editor and author.